All articles tagged with "Smother" 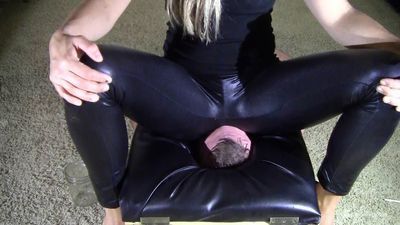 Lady Betty was frustrated with her contractor for taking ages with the work he was doing for her. She was pissed off and had to make him do it faster. She cornered him when he came to work today and she made him lie down and she trampled him with her high heels. She even used her whip to whip him and make him know that she will not tolerate anymore delays.

Mistress Melissa facesits on her boyfriend

Mistress Melissa wanted to try facesitting fetish on her boyfriend. He owed her and she wanted to use it to facesit on him. He had no choice but to agree. So she facesat on him and it was so much fun that she even took selfies while facesititng on him. She did it on the bed and even on her office chair in the bedroom while her boyfriend felt humiliated.

Mistress BlackDiamoond hates betrayal more than anything else. She values loyalty but this slave betrayed her and she was pissed off. She took him to her torture chambers and she forced him to blow her high heel. She also used him as a human ashtray before making him lick the floor and also lick her high heels. Then she used them to trample his back and made him regret ever betraying her.

Mistress Natasha loves shoes. And whenever she is buying a pair, she likes to test it on someone. She likes to wear the shoes and then standing on someone and hearing what he or she say about the crushing. She wanted a new pair of shoes so she went to the store and because tried them on the manager in that store's office.